Pagudpud, Ilocos Norte – Locals and barangay officials from Brgy. Caparispisan in Pagudpud rescued an endangered sea turtle which was accidentally caught in the net of a group of local fishermen led by Jimmy Villa, Sr. of Sitio Ayoyo on Saturday night.

The rescued sea turtle was identified by a combined team from North Luzon Renewables and Pagudpud MENRO as a female Green Sea turtle (Chelonia mydas) weighing about 12 kilos which appeared to be in good health at the time of the release. The actual releasing of the sea turtle was facilitated by barangay kagawads Ronald Samiano and Jovanie Domingo, with the assistance of Orlando Eduria from the local government unit of Pagudpud, and North Luzon Renewables. 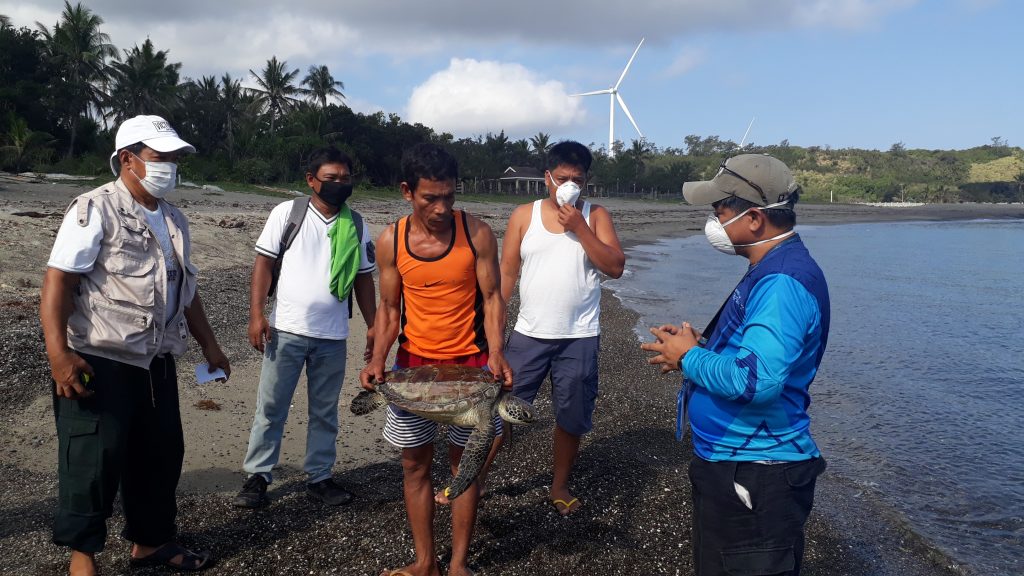 “We hope to strengthen this collaboration among the local community, the government units, and the private sector,” says Gabby Mejia, President of North Luzon Renewables. “Our goal is to create awareness on coastal environment protection to keep the coast clean and safe for the people, and as a nesting ground for the turtles. The participation of the community is very important,” Mr. Mejia adds. Pawikan conservation is part of the initiatives of North Luzon Renewables and NorthWind Power in empowering the local residents to protect terrestrial and marine ecosystems under AC Energy’s Conservation Estate Program. The project includes searching of turtle eggs and securing the nests until hatchlings find their way safe back to the sea.

Based on the IUCN Red List of Threatened Species 2004, the Green Sea Turtle is classified as ‘Endangered’ due to their dwindling population. The Philippine Aquatic Wildlife Rescue and Response Manual Series published by the Marine Wild Fauna Watch of the Philippines, Inc. identifies seven species of marine turtles in the world. Six of these species are found in Southeast Asia, and five of which can be found in the Philippines. Three of these species can be found in Ilocos Norte namely: Green Sea turtle (Chelonia mydas), Hawksbill Sea turtle (Eretmochelys imbricata), and Olive Ridley Sea turtle (Lepidochelys olivacea).